Once again we enter Spain, this time just about as far south as it goes.  We crossed this bridge between Portugal and Spain.  A massive piece of engineering. I wonder which nation had to pay for it – Spain, Portugal or the E.U.? It was free from tolls going to Spain but we did see a toll booth on the other carriageway.

We headed south from the border towards Isla Cristina because of all the flood plains and saltmarsh we could see on the map.  It turned out to be a depressing landscape of plastic enshrouded industrial agriculture.  Not only did the plastic cover the crops, it covered the adjascent saltmarshes, roads and wherever else the wind decided to take it.  Thousands of tons of plastic waste littered the countryside.  It was ploughed in to the ground, wound around trees, flowing in the streams, scattered across roads and tucked into every conceivable niche.  What are the farmers going to tell their grandchildren when they come to grow crops?

Not bothering to stay, we headed to Seville and the only bridge to cross the river Guadalquivir.  We had been told of a good cheap place to stay near the city centre but as we were looking for it we stumbled across some other motorhomers in what we have come to term a “Freebie” – a tolerated overnight parking place.

We were in good company: 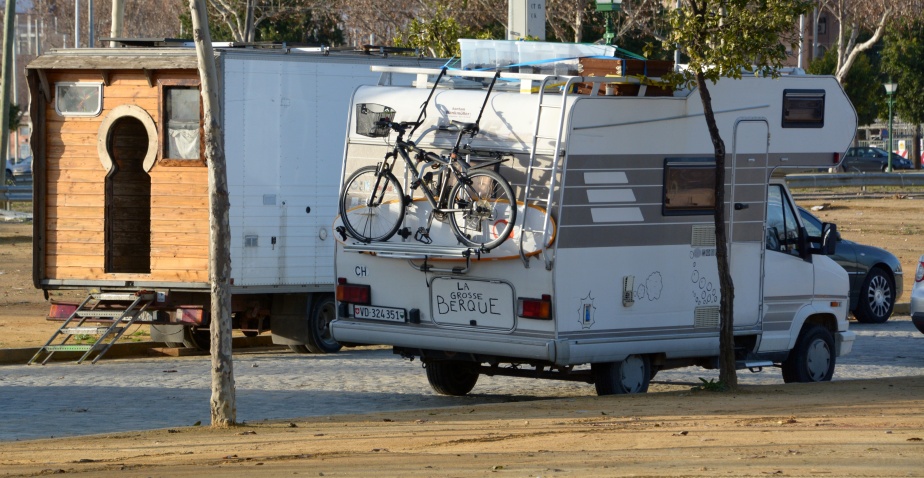 The Seville authorities seemed pretty relaxed about parking. Some French Fighter pilot just parked on the side of the road with his most unusual campervan or it may just have been a bit of a Mirage.

Seville was not somewhere we were going to remember with any fondness.  We walked in to the city and did what we usually do in these circumstances; we sought the Tourist Information Office.  Once there we waited whilst two sour looking women faffed about with their computers, not even looking up at us although we waited five minutes.  When one deigned to catch our eye we asked for a city map and some information on what we should visit.  Half way through her explanation, her mobile phone rang and she spent another 3 or 4 minutes chatting on it.  Eventually I just took the map and we walked out without letting her finishing her spiel.  As we reached the door, she put down her phone and shouted “The map is one euro!”  I chucked the map down in disgust and offered her a few poignant words of advice on customer relations!

We did find some interesting places despite the aid of the Tourist Office.

There were some spectacular roofs and towers with matching tiles.

A pity about the communications mast intruding, I bet the architect didnt have this in mind in 1568 when a former mosque minaret was converted to the bell tower of the second largest cathedral in the world.

It is amazing what you had to do in 1568 to get a reception on your mobile phone.

The trees in the squares and plazas of Seville were full of ring neck parakeets who quite happily took up the role played by pigeons in other cities. 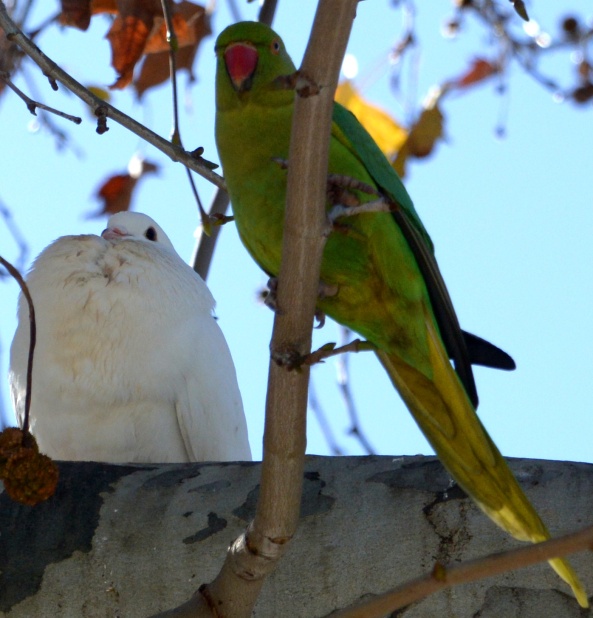 In fact the two species seemed happy to share the role of “City Watchers” from the same branch.

There were other very interesting touristy places like the Plaza de Espana but about this time Sheila took a tumble, falling over a step in a dingy passageway and gaining several cuts and bruises in the process.  This just about put the lid on our Seville excursion and we limped our way back to the motorhome and took off towards Cadiz.