We extended our stay in Conil for purely economical reasons – (50% discount if you stay a month) but we were then able to see the carnival that was much advertised about town.  The main procession was due to start at 5 in the afternoon and go on for about 3 hours.  We turned up at about 6 and there wasn’t a soul on the streets.   Were we too early? too late? No idea!  We had a beer in one of the nearly empty bars, did a bit of shopping in one of the poundland type shops (Where we saw the most unlikely scruffy man buying a “Fairy Magic Wand”) and went home.  When we got back, one of the other English Greytiders said “Didn’t you hear? They postponed the parade because of the high winds expected.”

Next night we repeated the procedure and it was well worthwhile.  We had been visiting the outdoor market in Conil for a few weeks and had noticed that the material stalls were all very busy selling gauze, fur fabric, foam lining, felt, polyester animal prints etc. and it was easy to see that evening what they were making.

The costumes and makeup were all brilliantly done and there were hundreds of participants.  This group danced along to their own music for the whole 3 hours.

The children were dressed up as pirates, balloonists, punk rockers, red Indian braves and a hundred other costumes.

The adults were not going to be outdone by their children either and the oldest Smurf, wickedest wizard, scariest werewolf and most charming princesses were all in attendance.

A great deal of effort and ingenuity was evident in all of the costumes. 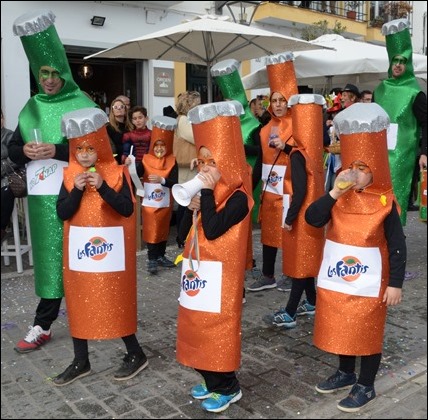 I don’t know if these bottles of Fanta were being sponsored bit they seemed to be enjoying the contents.

Some of the costumes made from the fabrics from the market stalls.

These golden boys of sport carried their podia a few dozen metres, had a quick drink, mounted up and froze like statues for a minute then marched on.

Hells angels and angelettes. I was horrified to see that the little ones were not wearing  crash helmets but they did keep the speed down if not the noise. 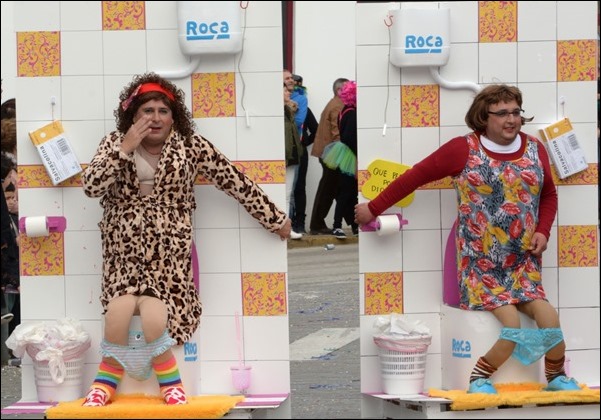 There were some fun costumes including these two Dames who walked in their cubicles looking as if in agony all the time. 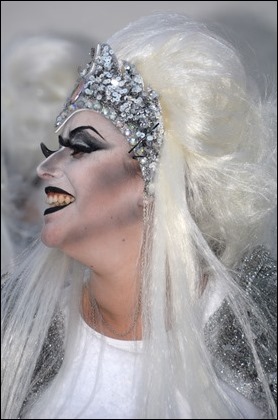 Clearly, some took the whole thing very seriously with costumes and makeup to rival Rio.

Well everyone deserves a break now and then!

Eventually everyone made their way to the seafront where a huge party was to keep going all night.  But this was Sunday, the original party would have been Saturday, giving everyone a chance to get a little sleep before school or work the next day.  I have no idea what excuses for not turning up for school or work they all used.