Crossing in to France from Spain brought us in to the “Pays Basque” with remote villages and hamlets dotted around the hillside and valleys of Basque country.  We stopped for one night in the main town: Saint- Jean-Pied-de-Port but the weather wasn’t being kind to us and we moved on.

There were animals in the fields but most of them on the farm where we stayed were indoors. These sheep were milked by machine every day and the milk curds were made into cheese and the whey fed to pigs.

Following the farm tour the French motorhomers next door invited us for a “Small beer”.  We tasted the farm’s cheese and we tasted the farm’s sausage, both were delicious. Then someone brought out a bottle of wine, I served a plate of Cheddar, a Champagne cork was popped, two reds, 1 white, numerous hors d’ oeuvres and five hours later we went back to the van for tea.

We had often stopped in a small town called Marmande before because they have a wonderful “aire” by the River Garonne” and as it was on the way to where our friends Nigel and Lindsay live, we stopped for the night.  The bright spring weather took my camera along the riverside. 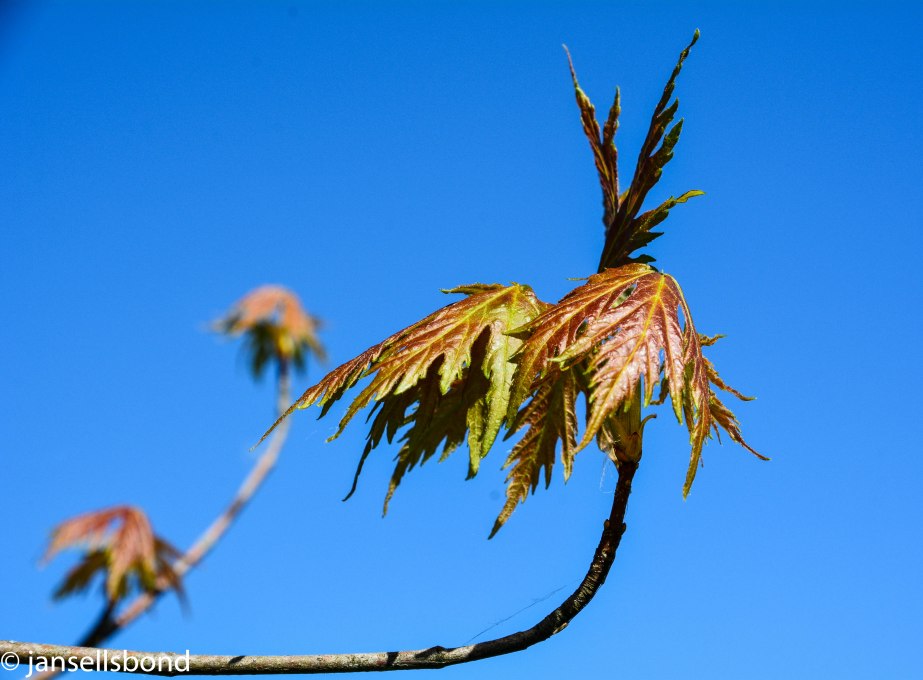 Our friends who have a very good knowledge of the area took us to see some beautiful towns in the area of the Dordogne valley that we might otherwise have overlooked.

For instance the beautiful Chateau d Eymet in Eymet. 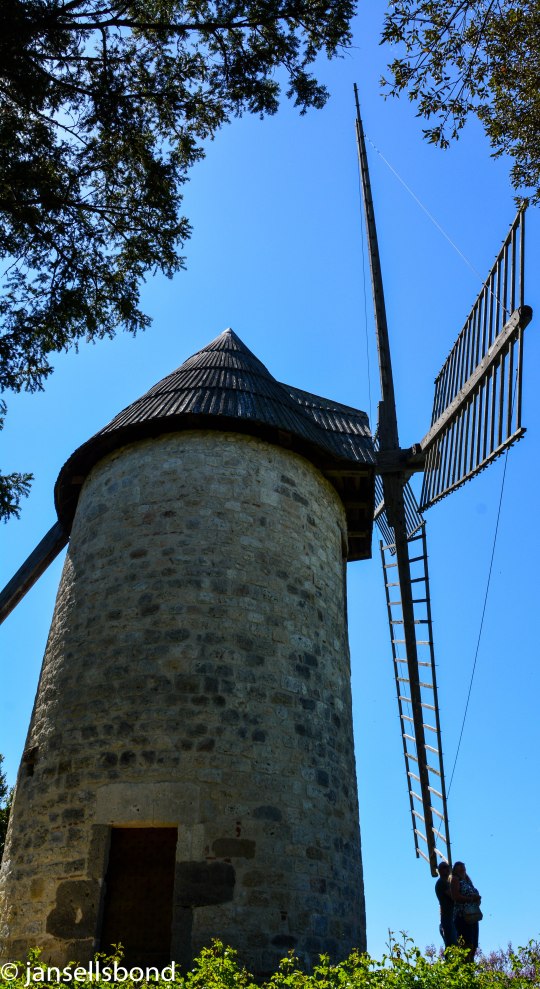 Most of what we learned from Nigel and Lindsay had to do with food and drink. Whether it happened to be live oysters and chilled white wine for breakfast…

Or some of the locally produced wines.

But the highlight of our trip around the region was a visit to Saint Emilion, origin of some of France’s most prestigious wine.  Vines have been cultivated here for thousands of years and the Romans used to pop over the Alps once in a while for a sup of the latest vintage.

The town is built out of limestone and has seen quite a lot of erosion both from the atmosphere and from visitors.   It was founded by a monk called, coincidentally enough, “Emilion” He lived in a cave that was later transformed into the Monolithic Church that still stands. 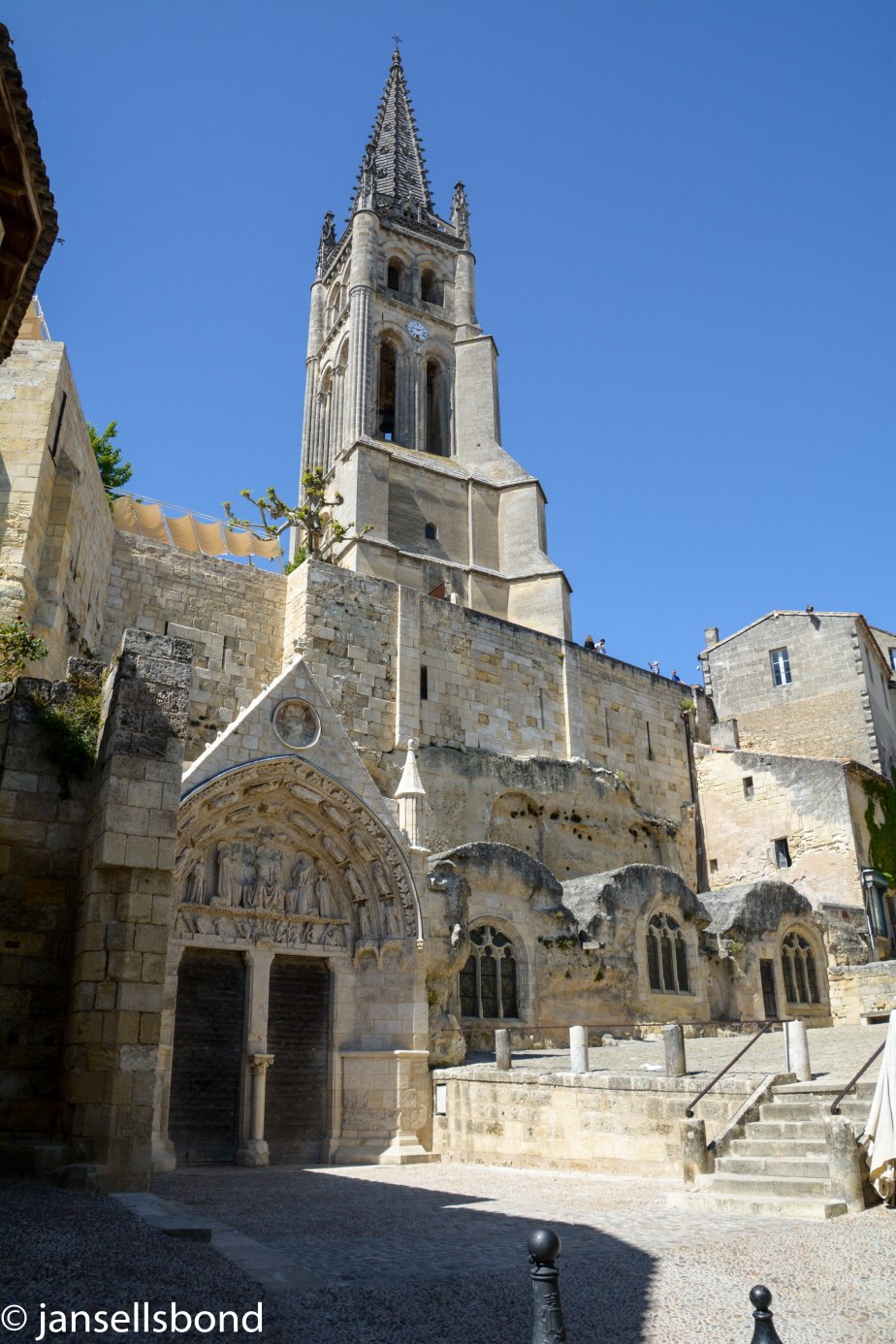 A view over the town from above the Monolithic Church.

The town is a popular tourist destination and wine is what the townsfolk want to sell to the tourists.

There is an awful lot of it about and even if your tastes extend to a vintage year similar to your own, the locals can probably cater to your peculiarities. (If you have the ready cash, that is!)

Much of the symbolism used around Saint Emilion is of course wine related.  A stained glass in a wine shop?

However, we were with an experienced guide who was willing to show us some of the more unusual aspects of the tow.  The Collegiate church and it’s cloisters were built between 1100 and 1700 (No not 11 in the morning and 5 in the afternoon!) and have some very interesting architectural and decorative features.

Some interesting photo opportunities if you can run half way round the square in the ten seconds your self-timer on your camera takes. 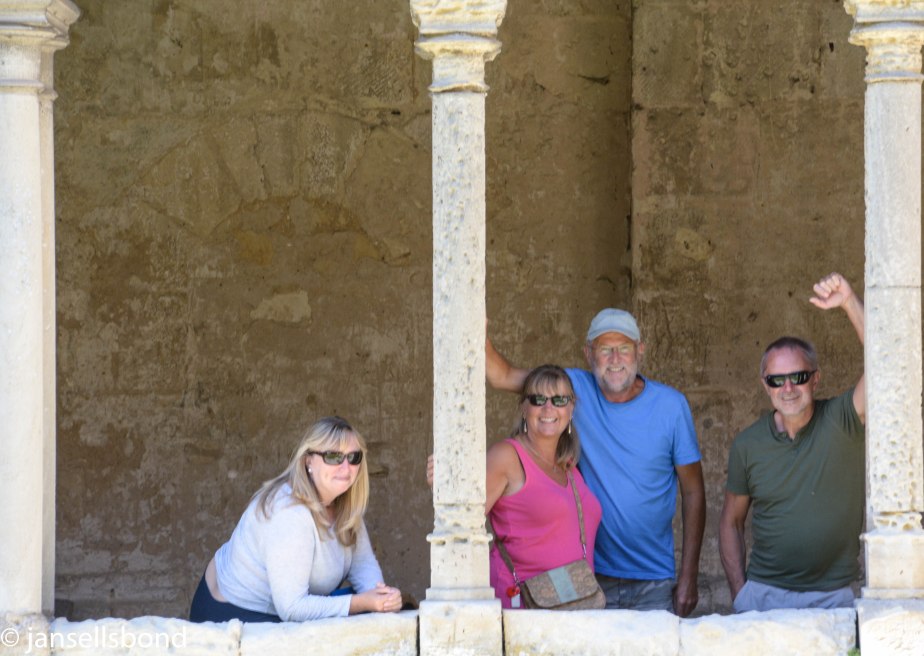 But the most unusual aspects were in the stained glass windows.  Here is a longshot of one:

Look at the right hand panel:

Definitely a pair from specsavers.  The next scene from the last supper contains this image of Judas looking like a comic book villain complete with sneer and Bag of silver. 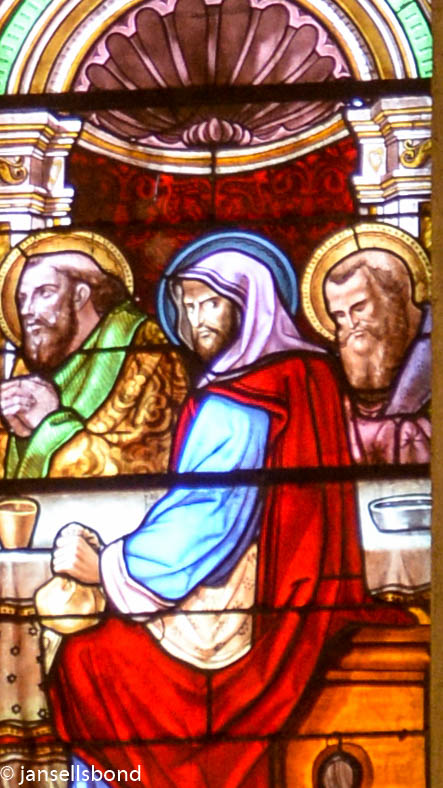 Even the drain covers bear the arms of Saint Emilion. Perhaps the most expensive vintages are stored below. 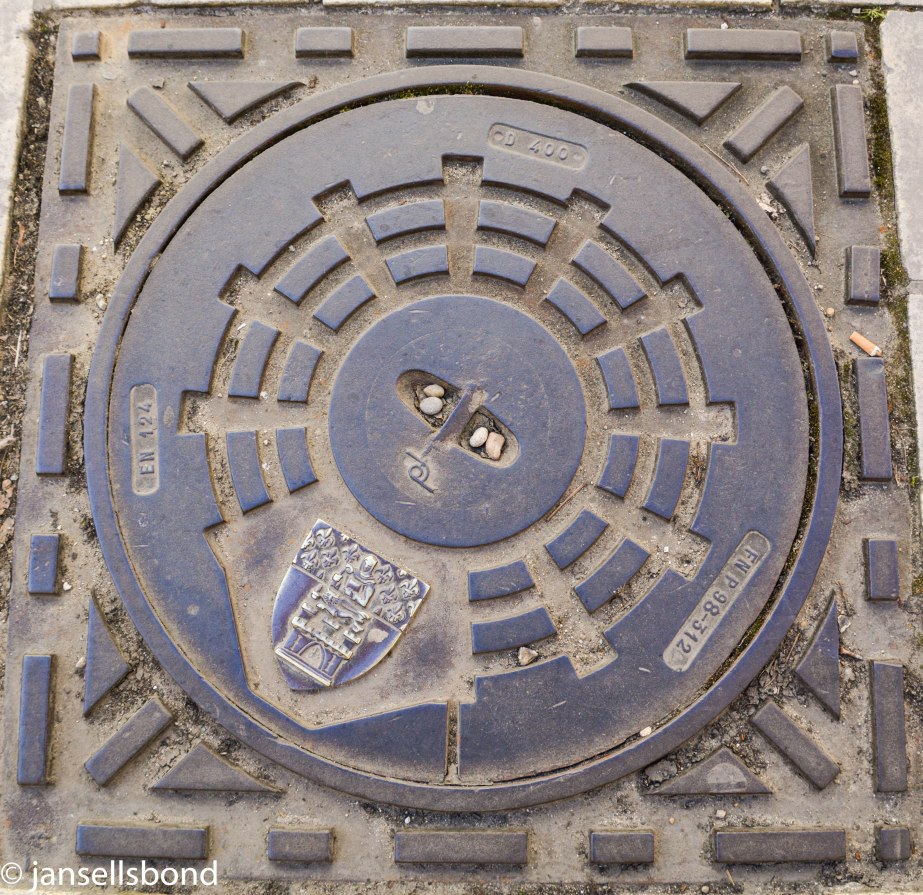 Many thanks to Nigel and Lindsay for the tour, wine and accommodation.  Here is a celebratory bottle of Les Cordeliers, named for the knots in the monks habit, being consumed in the gardens of the Collegiate Church. Thanks once again very much to Lindsay and Nigel. 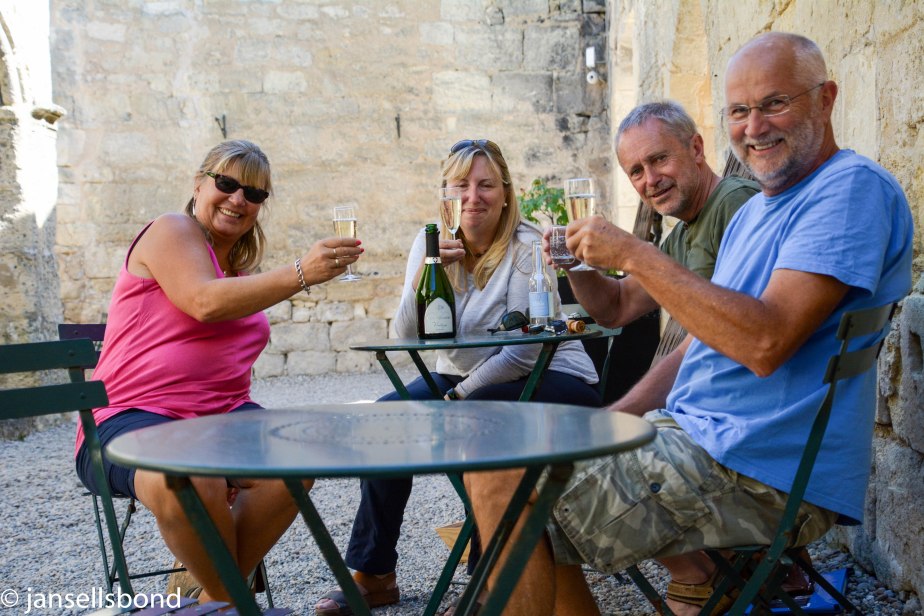