One of the interesting aspects of our journey is the contrast between the countries we visit.  Just crossing a border gives us a new set of experiences that are sometimes quite remarkable.  The next four photographs are of houses overlooking a river or in other quite touristy places.  The first two in Germany, the second two in France.  Although there cannot be said to be a rule governing external decoration of houses and public buildings, these four give an indication of the different attitudes between the two countries. 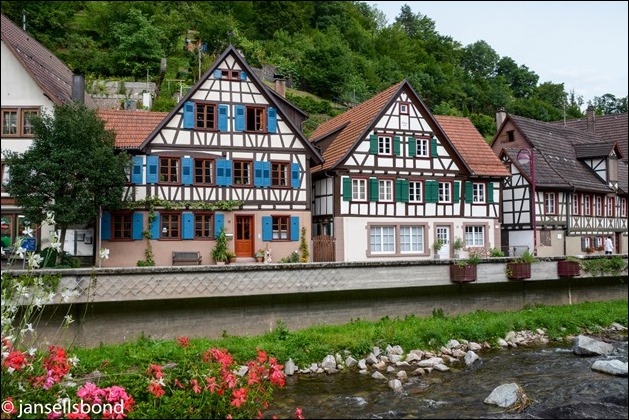 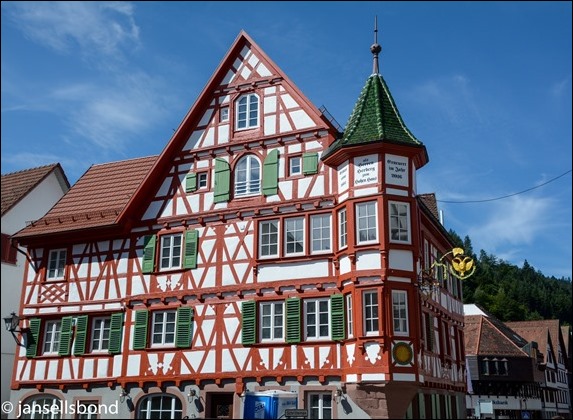 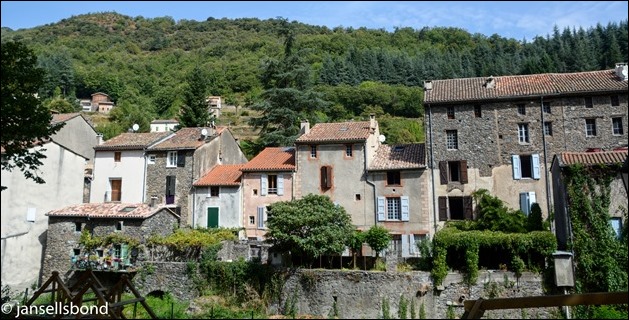 The differences are also apparent in the prices of everyday necessities such as beer or ice for G. & T.s.   In Germany the cheap Lidl beer is €0.50 a litre but cross the invisible border to France and it leaps to €1.00.  Two Lidl shops within a couple of km. sell practically the same beer, one for twice as much as the other.  Cross the border from France to Spain and the price of ice cubes drop from €2.50 to €0.95 a bag.  (There may have been price differences in the food but I wasn’t looking.)

Less obvious differences appear in the way people greet you or ignore you on campsites, the cost of eating or drinking out and having to pay extra for filling the van with water.  One difference, however, leaps at you and that is the standard of driving and road etiquette.   We played a game in southern Spain called “Spot The Dentless Car”  It got too boring because we never saw one.  Cars there get abandoned, not parked.  Zebra crossings are just decorations on the road, traffic lights are “mere guidelines” and overtaking is a sure way to display your “Inner Macho” (or inner workings!)

We have been lucky (Sheila says that it is her driving skills.) to have escaped any serious accident.  A pinged wing mirror or two on narrow city streets without damage until we parked in a motorhome stop in France.  It was enormous.  It was nearly empty.  We were tucked right in to the hedge.  That didn’t stop Frans Outelet, an octogenarian Citroen Picasso driver from attempting an enormous “U” turn and smacking in to our rear panel. 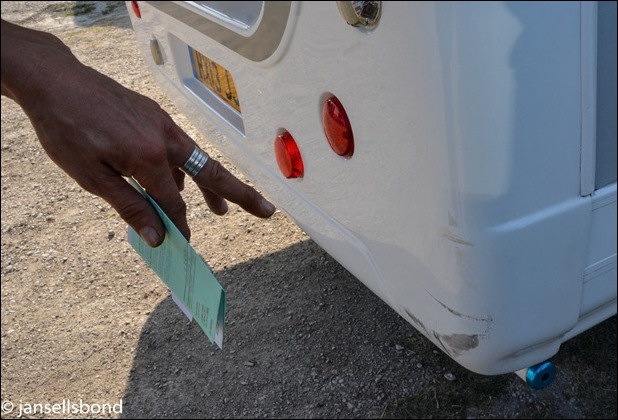 Insurances and details were exchanged.  Promises of payment were made.  Photographs were taken.  Apologies made.  Witnesses were assembled. As he left, Frans backed in to a railway sleeper giving him a corresponding dent in the rear of his Citroen.   Unfortunately we were in a hurry to be somewhere else and in the end we just said “Oh! Forget it”, rubbed it down with a pan scourer in the absence of T-Cut and stuck an “Ouch” band aid on it promising to fix it when we get back to G.B. 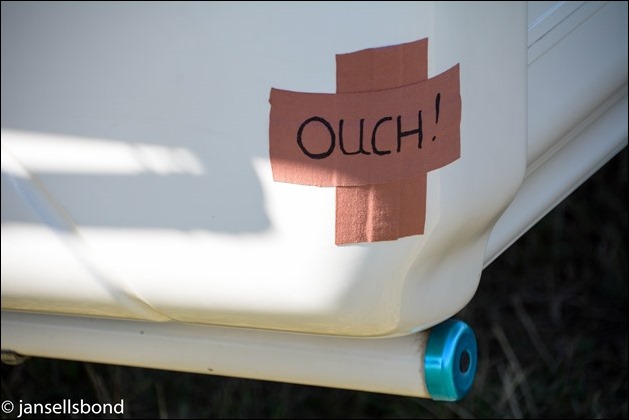 Our rush was that we had made arrangements to meet these four: 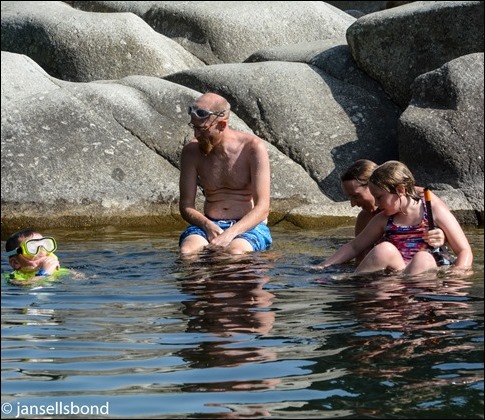 Rob, my son, Jennie, my daughter, Jack, our grandson and Edi, our granddaughter.   We met them at Nimes airport where they hired a car then we all drove to “La Corconne” , a campsite on the Herault river near Ganges in the South of France.  We had booked two weeks of good weather, good fun, good eating and good company. 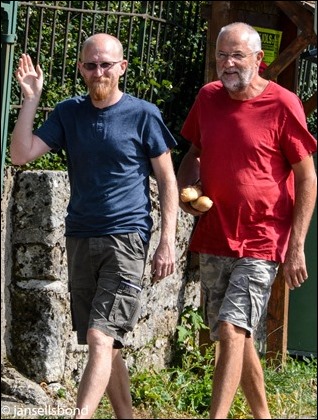 Best part of shopping in France is the Baguette Run in the morning.  It is easy to see where Rob gets his good looks from. 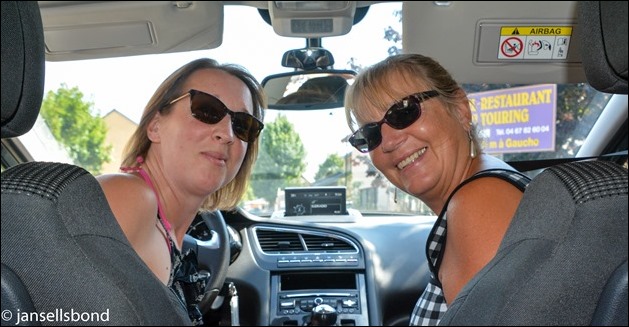 Driver and navigator in the hire car. (Good looks all round.)

Nearly the most important part of camping in France is the balanced and healthy diet.  Here is Rob applying the finishing touches to a “Crepe” or pancake as real people call it. 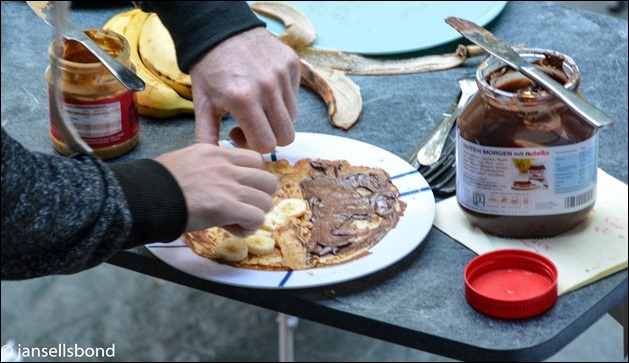 Note the peanut butter, banana and the only source of “Vitamin N”in the world;  Nutella.  (I think there may be a token squeeze of lemon somewhere in this picture.)

Here, however, is the really important part about the Rivers in this region.  You can jump from 5 metre high rocks in to 5 metre deep water…..if you dare! 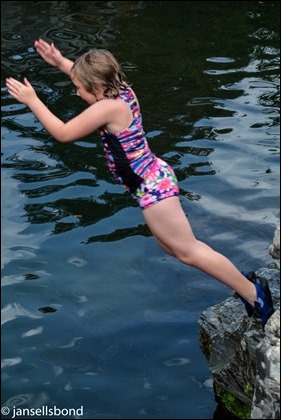 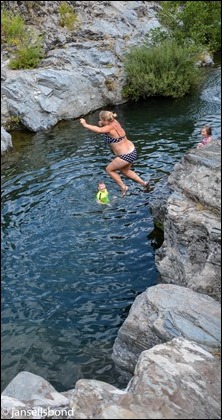 I must admit, the climb up is scary, the approach is terrifying, the launch is petrifying but once you are in the air it is so exhilarating that you just have to have another go.

We did manage some sightseeing whilst together and drove up to Mont Aigoual, the highest point in the Central Massif where they have so many electrical storms they have a lightning research centre and Rob once camped out alone at the summit during a thunderstorm. 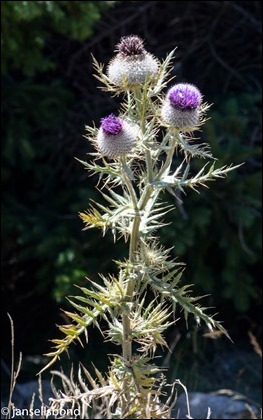 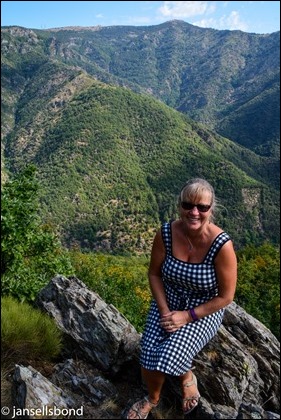 And some old haunts for Rob and Jen: L’Arch campsitenear  Anduze on the Gardon River. 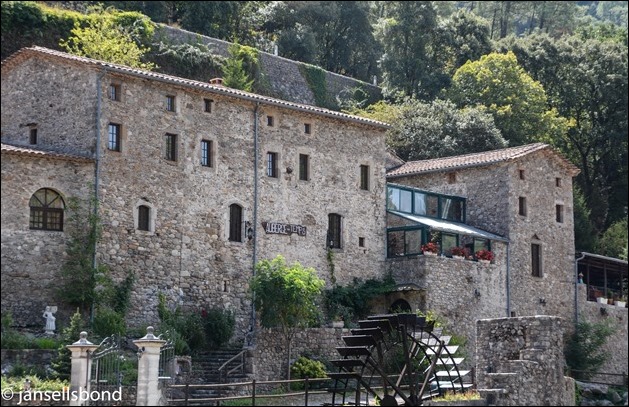 The pedestrian access to the private beach (unless there’s a train coming!) 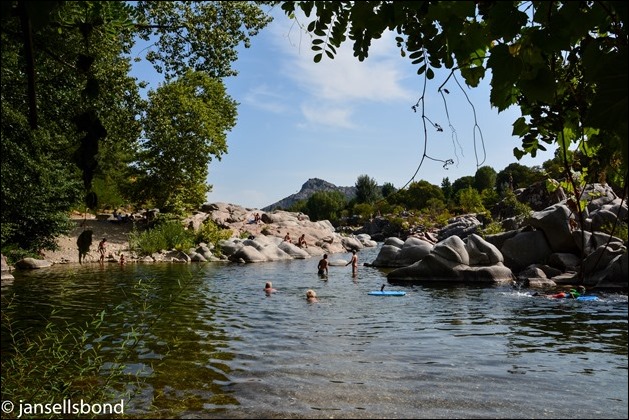 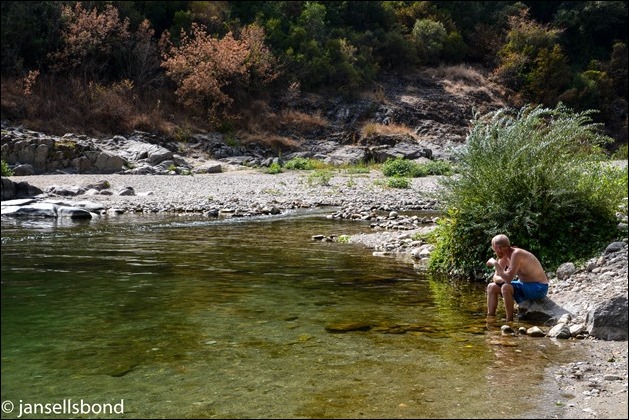 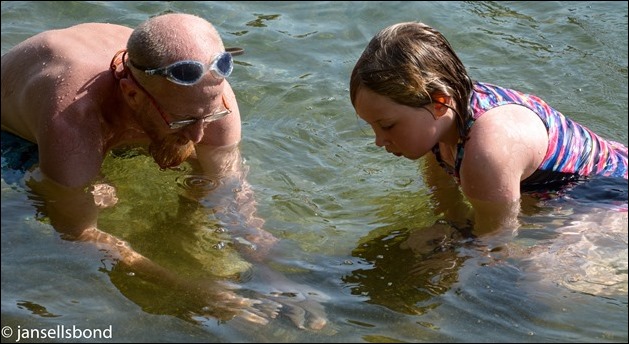 Most important part of the entire holiday: The eternal quest for that perfect skimming stone.