Having finished the last blog (Years ago I know.) in Florence this is an instalment that covers Greece, a side trip to Albania and our return to the UK prior to setting out once again, hopefully bound for Poland and all points south.

A brilliant way to remember where you are.

Here in Brindisi waiting for the ferry to Patras on the Peloponnese we came across Cesare Augusto,probably doing a bit of orating or declaiming. 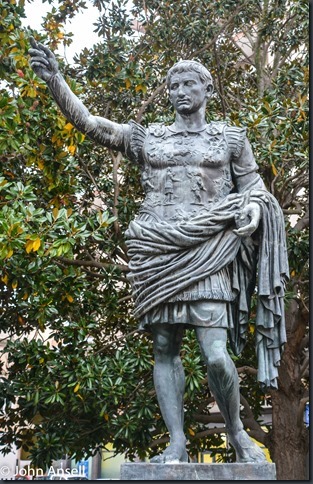 Brindisi is a huge port, originally a Greek outpost and now the busiest Adriatic port and a natural place to hop on a ferry to Greece.  We didn’t use this ferry, it was just well floodlit but ours was similar.  24 hours nearly for the crossing but we had a decent cabin and mercifully, the crossing was calm.

Having the time, I took a few photographs.  There was the sea, more sea and just a bit more.  Fortunately some of the denizens of the deep popped up for a quick portrait.

These flying fish were a surprise and I was caught with the wrong lens so these are the best shots I managed.

The trip south to the Peloponnese was a pleasant change in climate.  We appeared in a second summer although it was not destined to last.

The olive harvest was in full swing.  Here they trim some of the branches loaded with olives from the trees, put them over a motorised thresher to remove the fruit, then bash the remaining branches with long handled fly swats.

I just had to have a go and soon learned how back aching a job it is.

It seems to be worth the effort though.  How about mixed olives for a starter? 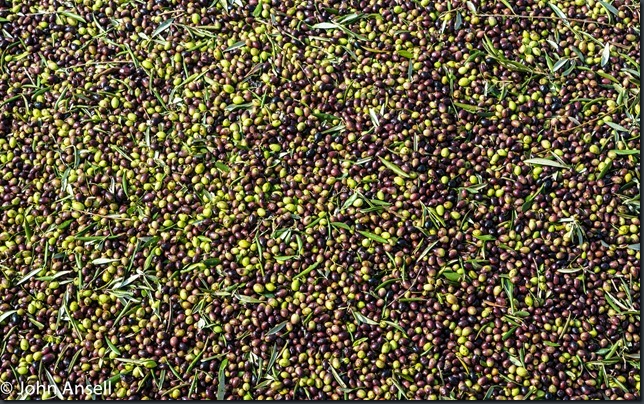 Sacks and sacks of them.

Olives as far as the eye can see.  Strange thing though, Greek olives are cheaper in Morrisons Teignmouth than they are in a Greek supermarket.

Some of the residents are a little put out by all the fuss in their trees.

AS you can see the tourist season was well and truly over.  Luckily a few bars were open.

Our electric bikes gave us access to the countryside and some of the tourist attractions still open.

Chlemoutsi castle near Glyfa, a medieval Crusader fortification in very good repair because it was never attacked in earnest.

An entirely different castle.  This one has Disney connotations but no Disneyland tourists here.  In fact it was entirely deserted.  Just a few hundred metres away from our freebie stay by a harbour so we wandered around without meeting a soul.

Leaving the coast and crossing the central mountains of the Peloponnese is and always has been a challenge.  This route may have been familiar to King Leonidas. 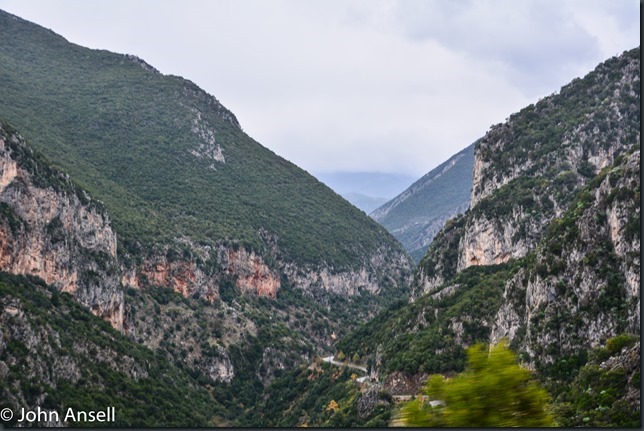 We crossed on a stormy day and the road was littered with fallen rocks, some large enough to leave craters in the road surface.

The scenery, especially the autumnal trees was worth the hazards. 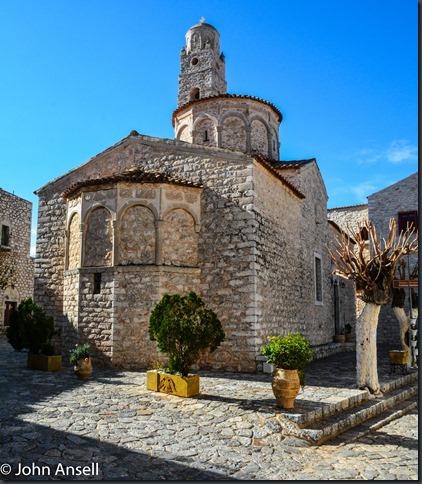 The Caves of Diros.   Fantastic stallegmthyngies forming from wedding cake up to cathedral sized formations underground.

Tourists are taken on a circuitous route via punt half an hour into the cave complex.

A good time to be wearing a life jacket.  Tin hats are optional.

The agricultural land around here is pretty rocky so not much chance of seeing a crop circle.  The nearest they ever get is a cow circle.   We camped by the beach here and listened to the cry of Golden Jackals (Wolves.  Wolves yes, believe me.) all night.

The road signs in Greece are mainly used for small arms practice.

Seven rounds from a small bore rifle and two close range blasts from a shotgun.  About average.

Then they get occasional employment displaying political slogans.

The traditional architecture of the south is that of fortification .

Probably all that bickering with the Turks and pirates  so modern houses are built along similar lines just in case…. 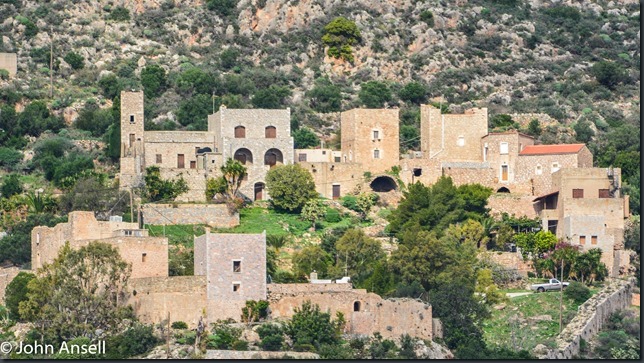 Our motorhome is parked in the bottom left hand corner whilst I go find the captain of the yacht to arrange a swap.

Looking out towards Porto Kagio and the southernmost tip of mainland Greece.

A traffic Jam, or what passes for a traffic jam in the Peloponnese.

A roadside shrine not so much  a slated roof more thatched with rock. 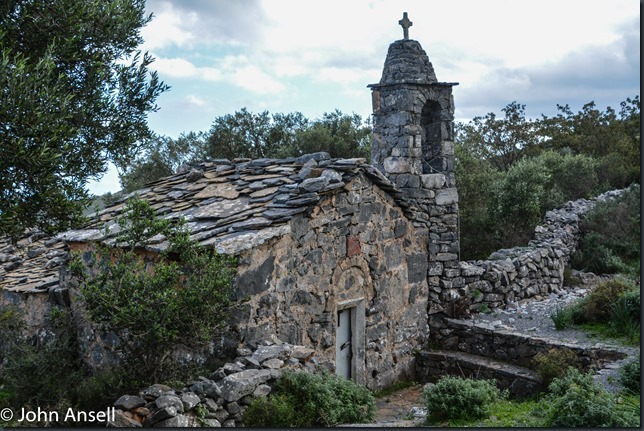 Alternative parking for that treasured classic car.  Traction Avant? on top of the entrance to a restaurant.

Just round the corner alternative parking for that classic boat. 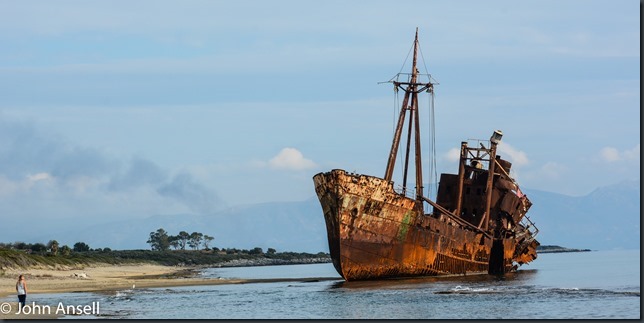 The Island of Monemvisia; another well defended location.  The bridge is only a very recent addition.

There are about 40 churches on this tiny island.

And countless fortifications. In the tourist season there are countless cafes and nicknack shops.

We found a cafe on the mainland and tried out their speciality; Gyros.  A combination of meat, onion, salad and chips wrapped in a flatbread.   Oh! and a beer.

The gulls loved the leftovers.

Just spotted this as we were driving past.  No explanation and no Trojans.

What are you looking at LBJ?

The biggest fish I caught, a Moray Eel. 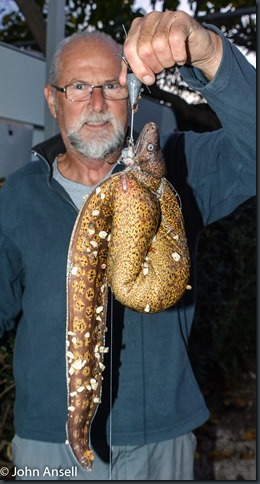 Even just before Christmas it was just warm enough for a swim in the sea. 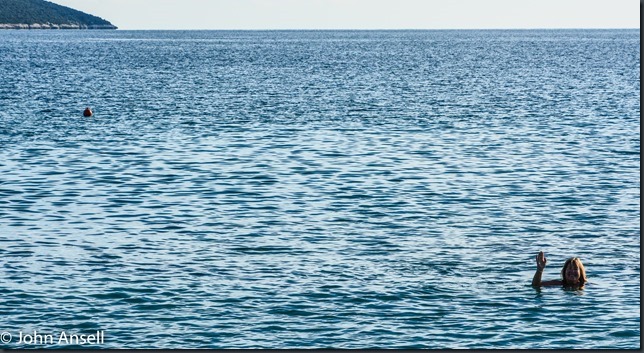 View from the castle in Nafplio.

Soldier on guard duty in the castle.

Great Egret reflected in the harbour near Drepano. 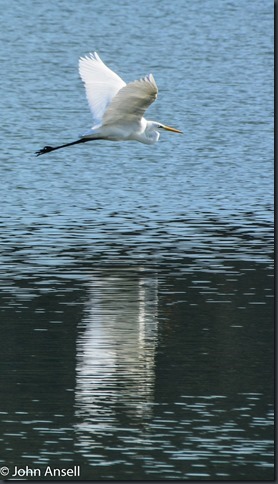 Christmas week and no tourists.

The beach outside our campsite, palm trees, sand, sun but snow on the distant mountains.

The great theatre of Epidaurus.  Work of the familiar architect Polykleitos 4th Century BC.

The Stadion where races have been held for millennia.  Familiar of course to those fond of the early 5th century BC Lyrical poems of Pindar.

This amazingly complex piece of machinery quietly rusting away on the site was presumably part of the terminated restoration process.

There are hundreds of these venerable old trucks in Greece.  They carry oranges, olives or laughing Bulgarian workers each in their season.

Now it is orange season.  If you fancy any oranges you can just help yourself if no one is watching.

The Corinth canal slices the Peloponnese off from mainland Greece.  It is spanned at one end by this sinking bridge.

The canal was first proposed in classical times and even Emperor Nero was at it himself with a spade at one time but to no avail.

It wasnt until 1893 that it was opened to traffic after 12 years of digging.  It was an impressive achievement as it is entirely at sea level with no locks and the walls are dug through  unstable limestone in a land prone to earthquakes.

Just round the corner on the way to Athens is a reminder of the dangers to shipping on the rocky coast.

Athens itself is a huge sprawling grey concrete city spreading from the sea up to the mountains. 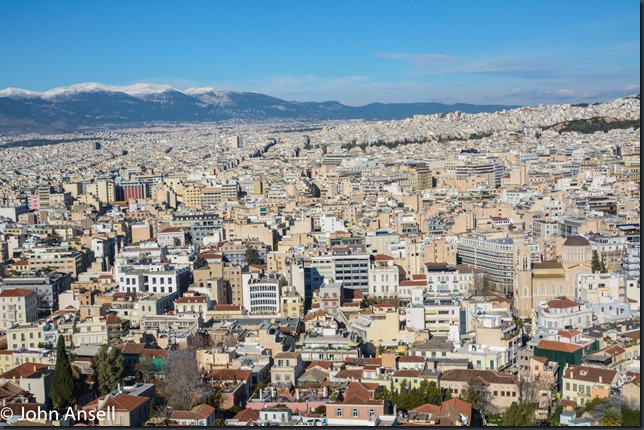 The Acropolis, ancient Greek citadel is the crowning glory of Athens.

Long seen as the symbol of western civilisation, it is an icon recognised by billions and we were very pleased to have been there.

Always in a state of restoration, it is attacked by earthquakes, acid rain, Xerces, bombardment and the ravages of over 2500 years of wear and tear.

The worlds largest game of Jenga. 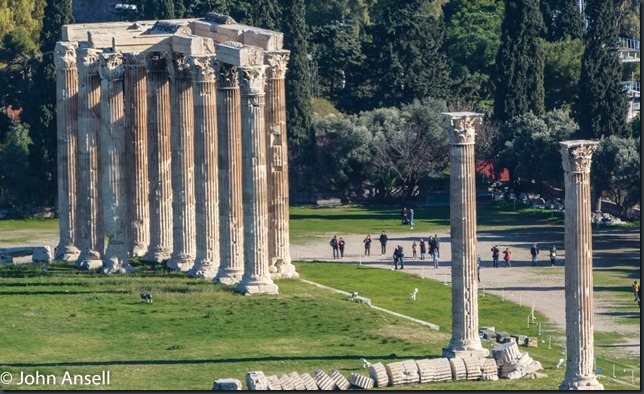 Early photograph on display at the site. 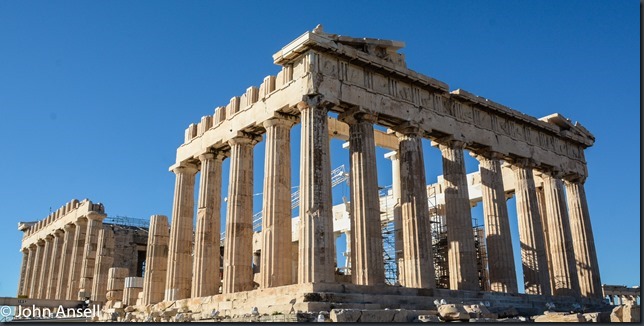 Part of the Erectheum supported by the Caryatids.  If you can spot an obvious gap….Ask Lord Elgin what he dun with it!

He nicked it in 1816 and flogged it to the British museum. (Allegedly)

Pity these chaps weren’t on guard then.  These are the crack troops of Greece,  on ceremonial duty at the tomb of the unknown warrior in Athens.  When asked if they are all volunteers, their commanding officer replied with a wink “Not exactly”.

They march in this carefully choreographed manner then stand to attention for an hour unable even to wipe their brow.

Not all in Greece is hunky dory at the moment.  Hundreds, or thousands of buildings like this one litter the countryside.  They were all abandoned when the economy took a nosedive.  And I mean abandoned.  Looking around many you can see wheelbarrows, cement mixers, hand tools and even the brickies plumbline among the weeds and young trees.

Sadly, at the same time, work ceased on the restoration of many of the national monuments from ancient times.  Weeds, tools and even cranes dominate the sites but never a workman can be seen unless they are taking money for entry.

Travelling through Greece was full of contrasts.  One moment snow covered roads up in the mountains, next the thermal springs where once King Leonidas had a quick wash and brush up.

A little sulphur adds to the ambience.

Lastly my dear friend the Dalmatian Pelican. Swimming around on the Former Lake Karla.  Even though the Greek environmentalists reflooded the area it still bears the sobriquet to this day.